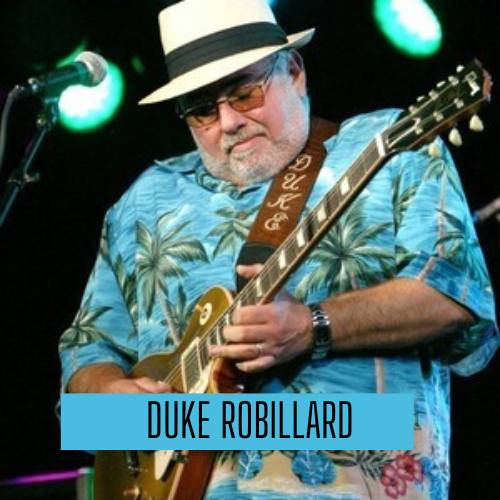 "One of the great players" - BB King // "One of God's guitarists.” The Houston Post. GRAMMY AWARD winner Duke Robillard is an American guitarist & singer. He founded the band Roomful of Blues & was a member of the Fabulous Thunderbirds.

Whether it’s a song, a style, an idiom or an image, Duke Robillard will render it with mastery, power, nuance & an unerring grasp of its essence.

This show will also be Premiered on BlueFrogTV.com - Sunday March 26, 2023

Show sold out? Click here to join the Waitlist!

Add to Cart
"One of the great players" - BB King
"One of God's guitarists.” - The Houston Post

GRAMMY AWARD winner Duke Robillard is an American guitarist and singer. He founded the band Roomful of Blues and was a member of the Fabulous Thunderbirds. Although Robillard is known as a rock and blues guitarist, he also plays jazz and swing.
Whether it’s a song, a style, an idiom or an image, Duke Robillard will render it with mastery, power, nuance, and an unerring grasp of its essence. He became a member of the Fabulous Thunderbirds in 1990 to replace the legendary Jimmie Vaughan.
Although he was a member of many bands, Robillard simultaneously pursued a solo career in which he toured and recorded solo albums in other genres, such as jazz and blues. He formed a duo with jazz guitarist Herb Ellis and the swing trio New Guitar Summit with Gerry Beaudoin and Jay Geils.  In 2013, he was enlisted as the guitarist for Bob Dylan's tour.
​
★2013 DownBeat Critics Poll, ranked among the  Best Blues Artist of Group
★2012 Blues Music Award Nominee - Gibson  Guitar Award - an honor he has won previously 4  times (category was previously known as Best  Instrumentalist - Guitar)★2012 Living Blues  Award Nominee - for Most Outstanding Musician  (Guitar)
★2011 Blues Music Award Nominee for  Traditional Blues Album of the Year for Passport to  the Blues AND Best Instrumentalist – Guitar ★2011  Boston Music Awards Nominee for Blues Artist  of the Year
★ GRAMMY Nominations for Best Traditional  Blues Album for 2010 Stomp! The Blues  Tonight and 2006 Guitar Groove-a-Rama
✭ 2012 Featured performer at Rock and Roll Hall  of Fame's Chuck Berry tribute concert on  October 27, 2012 along with Chuck Berry, Joe  Bonamassa, Rick Derringer
★2011 B. B. King International Artist of the  Year Award Nominee in The Toronto Blues  Society's 15th Maple Blues Awards program.  Duke won this award three years in a row
(2001-2003) and this also marks Duke's seventh  nomination
★2010 Blues Music Awards Winner for  Traditional Blues Male Artist of the Year. Also  nominated in 2010 for Album of the Year, Band  of the Year, and Best Instrumentalist – Guitar
★2004 Keeping The Blues Alive Award for Best  Producer presented by The Blues Music  Foundation
★The Blues Music Awards (formerly W.C.Handy  Awards) have named Duke Robillard "Best Blues  Guitarist" four years out of five
(2000,2001,2003,2004) making him the second  most honored guitarist for that award! He was also  nominated in 2005, 2007 and 2008.
★Collaborations playing with and/or producing: Tom  Waits, Bob Dylan, Maria Muldaur, Dr. John,  John Hammond; plus sorely-missed legends such  as Jay McShann, Ruth Brown, Jimmy  Witherspoon, Rosco Gordon, Otis Clay and Long John Baldry.