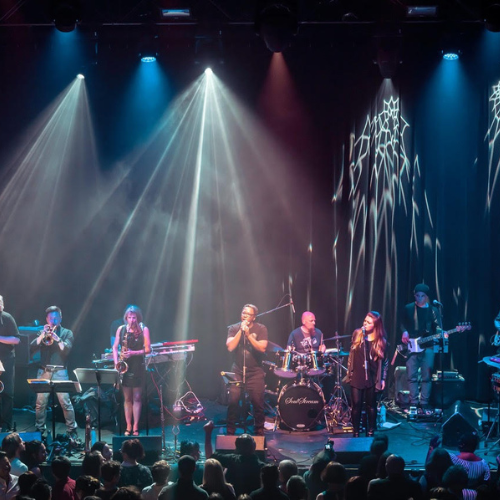 Soulstream makes its debut performance at Blue Frog Studios. With 2 lead singers captivating the crowd, the sweet ‘n’ powerful sound of a 3 piece horn section & the freight train of rhythm pumping from the band you will be in music heaven. Soulstream offers up a mix of feel-good 70’s Soul, 60’s Motown, Hip Hop, current Pop, and a dose of Classic Rock, which always has crowds singing along.

Add to Cart
Formed in the hay day of the Vancouver Acid Jazz scene, Soulstream brings to the stage 10 internationally acclaimed musicians, who create a sonic mosaic of Soul, Pop, and Funk, along with other genres. Since turning heads, and becoming a Vancouver institution at The Bar None, the band has moved on to become a popular choice at international musical festivals, concerts, corporate functions, and “barn burner” dances.
Soulstream has been voted # 1 in the Georgia Straight’s “Best of Vancouver” in various categories, and several of its individual  members have performed on gold and platinum selling, Juno and Grammy Award winning albums. It’s more likely than not that your c.d. collection, or Spotify playlist contains music that a Soulstream member has performed on. Yet their greatest pleasure is to groove, make you move, and inspire crowds to "get-up-offa-that-thing!” Just try to not dance to this band!

Individually, the musicians in Soulstream have a long list of credentials, some of the highlights include: numerous Grammy and Juno awards, 5 West Coast Musician of the Year Awards, Jazz Report Magazine’s Composer of the Year Award, and others. Many of Soulstream members have been featured in cover stories in various music and entertainment periodicals, and have performed on hundreds of cds (some which have reached gold and platinum status), have entertained audiences on international stages including: Radio City Music Hall, Sydney Opera House, and Wembly Arena, the list goes on and on. Band leader /drummer Randall Stoll has made two TV appearances on David Letterman, three on Jay Leno, Larry Sanders, Oprah Winfrey, VH1 specials, videos featured on Much Music/ MTV, and has performed twice on the Juno awards.