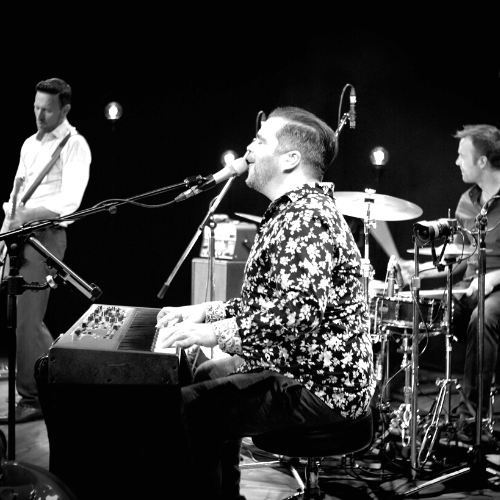 HOROJO Trio made their debut appearance at Blue Frog and blew the house away. We couldn't wait to get them back. One of the best concerts of the year! This award-winning, soul-rocking rhythm and blues group includes very accomplished musicians, Drummer Jamie Holmes, singer/keyboardist Jeff Rogers, and guitarist JW Jones. This is a concert you will never forget. Wait until you hear the vocals too.

Add to Cart
HOROJO Trio (pronunciation: HO-RO-JO, as in HO - Think Santa Claus; RO - "Row Your Boat"; and JO - "Joe") is an award-winning soul-rocking rhythm and blues group. With each member individually accomplished musicians, HOROJO Trio are drummer Jamie Holmes, singer/keyboardist Jeff Rogers, and guitarist JW Jones who has as a solo artist reached Top 10 on the Billboard Blues Charts, received multiple JUNO and Maple Blues Award wins and nominations.
The result of a chance jam session that was so inspired it left both the audience and trio wanting more, they’ve since won ‘Best Band’ at the 2020 International Blues Challenge and performed at several top blues festivals and venues — as well as a recent nomination for ‘Music Group of the Year’ at the 2022 Ottawa Awards.
The Ottawa Citizen says Rogers’ voice “practically bowls you over with intensity as sweet, rich, and gooey as molasses in a heatwave,” while Nick Krewen (Globe & Mail, Grammy.com, Billboard) calls JUNO nominee and IBC winner of “Best Guitar” JW-Jones “a frequent resident of Billboard’s Top 10 Blues charts and a roots radio favorite.” Holmes has toured throughout North America and Europe and recorded in Nashville with GRAMMY-winning producer Tom Hambridge.